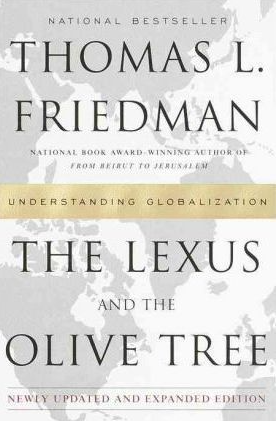 An Excerpt from The Lexus and the Olive Tree

Recently I had the good luck to have to refer to this book again. I initially read it around 2000 when Slimline’s then CEO, Dian Gomez, lent me his copy urging me to read it following an interview for Athwela Vyaparika Sangarawa, which was featuring a 360 degree look at the garment sector.

At the time Thomas L Friedman was a two time Pulitzer Prize winner for his international reporting and a columnist of the New York Times (still is). It sure was a worthy and interesting read.

The book really made me proud to be a Sri Lankan.

Anyway, here’s what Friedman wrote of his 1999 visit to Sri Lanka. I thought many of you would want to read it.

“The more business that is conducted over the Internet by more people from more different corners of the globe, the more it is going to harminize how people do business in every corner of the globe,” argues Bob Hormats, vice-chairman of Goldman Sachs International.

I got a taste of this on several levels while visiting Sri Lanka in late 1999. The morning I arrived I drove from the airport two hours out of Colombo to visit one of Sri Lanka’s top textile factories. The road to the factory was a single lane, where passing other cars and cows was a harrowing experience. The landscape was that of a tropical rainforest. Eventually, though, we reached the village of Pannala, outside of which was this very modern textile factory, with freshly painted buildings, manicured lawns and satellite downlinks. It looked like it had descended from Mars. The factory belonged to a Sri Lankan firm, name Slimline, that manufactured clothes for Victoria’s Secret and Marks & Spencer. The factory was completely computerized and was soon to be linked by Internet to the Victoria’s Secret chain to handle E-commerce. About 1,400 employees, mostly women ages eighteen and older, worked on rows and rows of pneumatic sewing machines. Everyone wore a uniform, and pregnant women were identified by a red cap, and expected to keep a slower pace. The factory was air-conditioned and was clean enough to eat off the floor. The workday was eight hours, but intense, as each woman had to stitch so many garments per minute. Each assembly line was tracked by computer and a certain average production had to be reached for the women to get their monthly bonuses. Wages were about $80-$100 a month, including breakfast, and there was a waiting list for jobs. In terms of working conditions, this factory was world-class. Wages aside, I would let my own daughters work there.

I asked the plant owner, Mahesh Amalean, why the fancy factory? Why not a sweatshop? Wouldn’t that be more lucrative for him? No, he explained, it wouldn’t–because of globalution. The only way Sri Lanka can survive in the textile business, against even lower-wage countries such as China and Brazil, is if it moves up the quality ladder, and produce better goods for big, global, brand-name retailers. Racing to the bottom with Bangladesh is a no-win game, he explained. The only way to build long-term relationships with the big global brands is to produce higher- and higher-quality products under better and better working conditions. “Those brand retailers are now demanding not only better prices and quality, but better conditions for workers,” explained Amalean. This is not because Victoria’s Secret has suddenly become socially conscious, but because American consumers and college students have become more socially conscious as a result of some very high-profile antisweatshop campaigns. And these consumers are now telling stores that they do not want to be wearing goods made under sweatshop conditions.

In other words, one of the big reasons working conditions have improved in Sri Lankan textile factories is not because Sri Lanka put up walls against globalization, but because in today’s global economy Sri Lankan manufacturers must tie themselves to big Western retailers to survive, and the more they do that the more their factory standards have to meet the workplace norms being demanded by Western consumers. “When the buyers from Victoria’s Secret and other big brands come through now, [working conditions] is one of the first things they ask about,” said Amalean. “They have to, because they have customers asking them about it.”

An Update: Tom lived up to his word and actually sent his daughter…

I am told by trusted sources at Slimline that Tom Friedman actually sent his daughter to work at the factory (for a couple of weeks), following this visit.

Excerpted from: The Lexus and The Olive Tree, Thomas L Friedman, 1999 published by Farrar, Straus and Giroux
You can check out the latest edition here on Amazon.

Start a Blog at WordPress.com.